And your Hellride winners are... not me.

There is always next year. The Santa Cruz Hellride page doesn't seem to have a whole lot of fanfare about it. Actually that sort of took the wind out of my sails relating to this event. Kind of a "Hellride, eh, whatever". And of course I don't like the looks of the new Nomad. I suppose the stats are better. That's all relative. Throw a CCDoubleBarrel on it. Problems solved. Also it looks like all the others of that ilk out there now. Generic. No more bulldog. "What's the matter McFly you got no scrot?" Not to say I wouldn't take one if you gave it to me. I'm not a latest and greatest guy as far as bikes go anyway. If you got no ass to back it up lookin purdy just makes you another Gear Queer. Obviously I'm in a mood today. I'm lousy about posting and feeling a bit nastalgic. It was a year ago that we rocked Switzerland. Ahh the Memories. 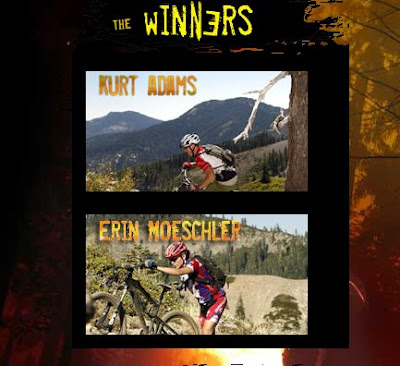 Just messing with you...you would have rocked the Hell Ride.

Man i wish i could have done it. And no your a review queer. messing back. wish i could get all those freebies.

You both are queer. Blogging is super-queer. I suggest a wrestling match at the next Pisgah "outting" (no pun intended)to settle who is the queerest of them all.