On my way to pisgah 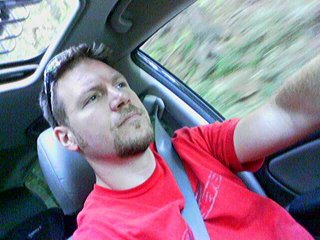 I drove up on Friday by myself. I couldn't stay for Sunday too. The riding Friday and Saturday was absolutely great. Huge turn out and some good riders. MobilMyk

Man did that turn out to be a great weekend of riding. I only got in two days but Wow. I had a blast. Friday we got in a shuttle run of Avery Creek. Rocky, Technical. Dave Turner of Turner bikes fame accompanied us. Great Guy I really liked hanging out with him. Bought everyone dinner Friday night. Builds and awesome bike, even though I don't have one.
Ok, anyway after the down hill we went to the CaneCreek machine and assembly shop for a tour. Malcolm over there is a great guy and showed us around. Handed out the free pint glasses before we left too. So on to another ride for the afternoon. We met the rest of the Turner crowd at DuPont forest. BTW this was a big Turner gathering so me being on the Nomad I was sort of the odd man out. But if you know me then you know I let's dem Turner boys know where the Bread gets Buttered.
The DuPont ride was great.
Saturday's Black Mountain group ride was the Shizzz. I had so much fun on that down is it was crazy. So freakin fast. The Double barrel shock made me fearless. I was pushing it hard. The landings and cornering felt so plush it left a smile on the face to this day. A Santa Cruz Nomad paired up with a Cane Creek Double Barrel. Fuhgetaboutit. Man you can't go wrong.
The Turner fellas have lots of picts over at their forum.

Plans may change but, Hey. It's still riding. Life. It's good. Good post and this post helped me alot in my college assignement. Thank you for your information.