My route was longer than going I 70 but so worth it. I have to say spending about 2000 miles on my new GSA I really got to know it. I love that bike. The day after I got back I did a ride to North Ga. I had some things to attend to up there. It was a beautiful day for a ride. I think I need a couple days off though. The only part that is really sore is my neck. Not used to adding the helmet weight to this noggin for five days. The bike was comfy and I found out that bicycling shorts as an underlayer are the only way to go.

The night before I left for Denver I couldn't sleep. Excited yes, and a little nervous. Flying was most of it. I don't really care for it but the upgrade to first class took care of a lot of discomforts I have with not fitting in those damn seats. I read a book and took a nap. Dan who was selling the bike picked me up at the Airport. Great guy that Dan. We went to his house and the Shrine that I call his garage. The man has is priorites straight that is for sure. The bike looked great.
As promised. We went to the post office to mail off the payoff. Dan gave me two rear knobbies for the bike and we took those to Fedex to send them home. Lastly we went to the DMV and I gotta say you will never have an experience as pleasant as that in this state at a DMV. Mmmm Hmmm.
I loaded the bike up and put on my gear. Made my way out of town to I 25 south. I would say it was a few hours into the ride and I ran out of gas in "Somewhere" Colorado. I made it half way up an exit ramp and then pushed the big girl to the top and parked her off to the side in the dirt. Luckily a lady and her kids came by and gave me a ride to get gas. I had to buy windshield wiper fluid. I dumped it out in there windsheild cleaner box. Swished it out with a little gas. Went back and put some in the tank. Started the bike then went back and filled up. Arrghh! (I later found out by stopping at the BMW moto dealer in Oaklahoma city it was an issue that BMW has a fix for. I didn't have time for them to fix it so I pressed on and just watched the mileage.) Dan never had an issue with it. Lucky me it popped up. Well at least I got a ride for gas right away.
This put me more behind. I really did not want to ride across the Texas Panhandle in the dark. It's flat and wide open but at night as I have experienced before all you can see is straight out in front of your head lights. But, I lucked out and the sky was clear with a full Moon. I could see all the Praire. I felt pretty sure no animal was going to surprise me. As soon as I headed towards the East the crosswinds were unbelievable. I rode for hours in the dark leaning to the left to counteract the wind. Not to mention freezing me arse off. Still it was really cool with the Moon out and being able to see for miles. I made it to Amarillo and the Big Texan around Midnight.

I missed my steak so I just got a room at the Big Texan Motel and ate a bunch of trail mix. Then I went to bed. Between my nerves and trying to make up time I hadn't eaten anything
since breakfast which wasn't much. I figured an empty stomache was probably a good idea anyway. Kind of hard to pull off in the middle of Praire lands and disguise taking a poop. "Hey everybody. Nothing to see here".
The next morning I had Breakfast over at the Big T. A bit disappointing as I know how good a steak would have been. I hit the road and spent the whole day in crosswinds. I made a lot of stops. It just got to be very taxing. Still I made it to the Oark General store in Arkansas to meet Adam with plenty of daylight left. 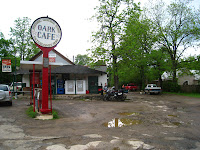 Adam was there waiting. He rode in from Roswell. He did a very cool thing for me. I sent him a text when I made it to Amarillo he knew I couldn't have made it in time for the steak I had wanted so badly. He had the good folks at the store save the last T-Bone for me. I had that and the Sweet Potato fries. I finished the whole thing up with a slice of homemade Apple Pie with ice cream. DAMN! That was a good meal. Not to shabby for a 40th birthday.
Oh and don't ask for the Pecan Pie there. They call it Caro Nut as Adam found out. Hahaha Cay-ro Nut.
We camped up the road at a site next to a river and had a great sleep. Adam had brought a couple of lightweight tents that did a great job of keeping the rain out that night. Oh yeah and I dumped the bike in a mud puddle. I forgot about not having knobbies and took off about 3 feet. Ooops. We laughed, picked it up and set up camp. You could ride that thing off a cliff and it would be fine.
Love it, love it, love it.
The Oark General Store provided a great breakfast and we were on our way. We hit Forest Service roads for a while and then Mountain Twisties. Once I figured out my riding style I was really comfortable with the curves and the feel of the bike. I went at it like a Mountain Bike. Or dirtbike. Sort of SuperMoto style. Leaning the bike in and the body out. Or keeping your body kind of vertical. It works really well for me. I think the bike likes it better than Sport Bike style. Now all I have to do is get the rear to slide through. HA!

The Mountain Carving fun didn't last because it started to rain. That lasted about a couple of hours and then we were back on highways. We rode in to East Arkansas. Yuk. Made dinner at a pinic area that we thought was going to be a state park with camping. We end up in a Hotel outside of Memphis. Another Yuk. We left Memphis Monday Morning and got home around 4:30. The last day was pretty uneventful.
I have to say it would have not been as fun with out Adam coming up with the idea of meeting up in Arkansas.
Riding a new bike close to 2000 miles was a really good way to get used to it. I think it was probably safer than picking it up locally and riding around in the traffic and silliness around here right out of the gate.
More pictures.
at 10:00 AM